Note: this article originally appeared on The Trek, which you can read here.

Over the past decade, the number of people hiking long-distance trails in the U.S. has surged. Between 2013 and 2017, the number of PCT permits issued has more than tripled. The AT has seen similar growth (155 percent increase in NOBO thru-hikers between 2010 and 2017). There seems to be no end in sight to the increasing popularity of long-distance hiking trails in the U.S. The permit system can only do so much to limit crowds on trail and it is becoming more and more difficult to get a permit to fit your plans. Will there be a point where hikers begin to look elsewhere for thru-hiking?

Although the Canadian thru-hiking community is not as prevalent as in the U.S., your friendly northern neighbors boast our own long-distance trails. The Bruce Trail in Ontario follows the Niagara Escarpment across the province. There is an extension of the Appalachian Trail that continues up through the Canadian Maritime provinces (and even extends into Europe). In the Canadian West, the Great Divide Trail follows the Rockies along the Alberta/B.C. provincial border. As the long-distance trails in the U.S. become increasingly crowded, perhaps these Canadian trails will be where adventurers will turn next for nature and solitude.

One of the more rugged and challenging trails on this list, the GDT runs through the beautiful Canadian Rockies. There is an official GDT app, which is affiliated with Guthooks. The GDT has had a lot of development over the last few years, so the GDTA puts out annual updates to the trail. Maps of the GDT can be viewed or purchased here.

Difficulty: High. The trail is rugged, not always well-marked, and requires some navigation skills

Resupply: There are only four stores along the trail where you can resupply (Waterton townsite, Blairmore, Banff, and Jasper), so sending resupply packages are essential to hiking the GDT. Here is a list of resupply locations on trail. Some are on trail, others as far as 29 km away. You can get fuel canisters at Waterton, Banff, Jasper, and the Blairemont hardware store.

You are required to book campsites in the national parks along the GDT, and camping backcountry in provincial parks requires a reservation. It is very important to book your stay in advance, especially in Jasper and Banff National Parks, which book up very early.

Have you summited Katahdin and want a little more AT? Well, I am happy to tell you that you can! The Appalachian Trail has an international extension that goes into the Canadian Maritime provinces. In fact, when the last supercontinent (known as Pangaea) broke up, the Appalachian mountain ranges were spread across four continents, so there are sections of the International Appalachian Trail in Europe and northern Africa.

Season: May to September

Getting There: The IAT starts right where the AT ends at Mt. Katahdin, and the Northern Terminus of the Canadian IAT is in Gaspé provincial park.

Resupply: There are towns with small grocery stores along the IAT, and you can mail yourself packages. Specific information about the Quebec portion of the IAT can be found in this article.

Camping: The Canadian portion of the IAT has three kinds of camping facilities: camping platforms, shelters (closed or three-walled), and cabins. 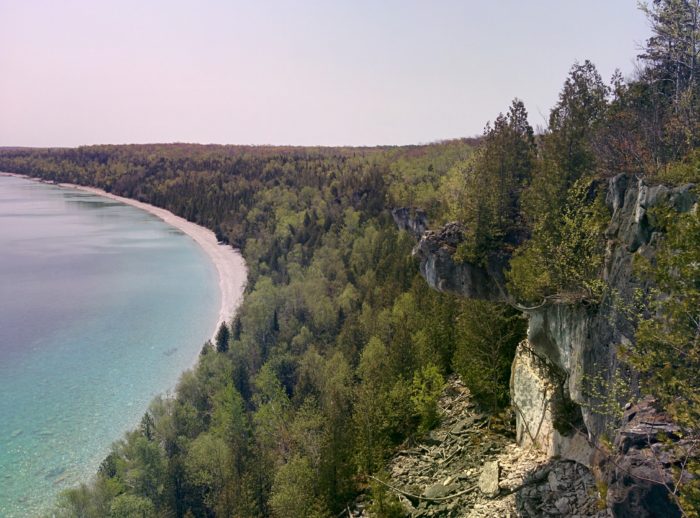 The Bruce Trail is incredibly beautiful. It starts near the U.S. border by Niagara Falls and traces the Niagara escarpment across southwestern Ontario to the northernmost tip of the Bruce Peninsula. The northern part of the trail follows the edge of Georgian Bay, an iconic Canadian sight where deep forest meets rocky, cold beaches, and clear blue water. There are sections of the trail that pass through farmland, cottage country, provincial, and national parks. It is maintained by the Bruce Trail Conservancy and volunteers from local clubs. There is no permit required to hike the Bruce Trail. Maps of the Bruce Trail can be viewed or purchased here.

Getting There: Access to the Bruce Trail is easy as it passes through heavily populated areas. The Southern Terminus is near Queenston, Ontario, and the Northern Terminus is in Tobermory, Ontario.

Season: The trail is rocky as you climb  and descend the escarpment, which would be treacherous to hike in the winter. However, the summer in southwestern Ontario is very temperate. Hiking between May and early October is comfortable.

Resupply: There aren’t as many dedicated trail angels as the long-distance trails in the U.S., but when I’ve hiked there everyone is really friendly. The locals are happy to offer a hand to hikers, and most of the roads around the trail are busy so it’s easy to catch a hitch if you need one. The trail passes through many small towns, so it is easy to resupply there. There is one longer section up north where you have to hike 82 kilometers between towns, but you can mail packages to Mountain Trout camp (45 kilometers south of the Northern Terminus). The owners are really friendly and helpful to hikers.

Camping: In addition to paid campgrounds (fees vary), there are some free “overnight rest areas” for hikers. I brought a hammock tent on the Bruce Trail and had no difficulty finding good places to hang it.

There are many other long Canadian trails not listed in this article, including the Newfoundland T’Railway Provincial Park, the Kettle Valley Rail Trail, and the Confederation Trail.

The Great Trail (previously called the Trans-Canada Trail) was finished last year and crosses the entire country (though it includes waterways in its measure). Spanning 24,134 kilometers (14,996 miles), it is not so much a thru-hiking trail as a series of interconnected trails and waterways throughout Canada.

The increase in popularity is putting a burden on the American thru-hiking trails and community, but far be it for me to try to discourage people from seeking the wilderness through hiking trails. I would love to see people come to these lesser-traveled trails and build up those communities. There are many different reasons to hike long-distance trails. The freedom. The nature. The solitude. The company. All of these reasons hold true on these Canadian long-distance trails.