Spent a night in Wrightwood

My zero was uneventful, I ate more McDonalds, helped Mette get new shoes, then pretty much slept the rest of the day after I got to Wrightwood. I feel like I’ve only been getting a mediocre quality of sleep on trail, so about once a week I like to pass out for over 12 hours. I did manage to get a replacement mat from REI (and returned the one with a hole in it). I got the NeoAir XLite (size women’s regular), but I find it both too long and too narrow. I roll around when I sleep so I’ve just been rolling right off of it. I’ll see if I can find a men’s 3/4 length to swap it out with. Otherwise, seems like a good mat. Very light.

I only did ~10 miles the first day out of Wrightwood. I was feeling a little stomach sick and also had to climb a mountain that day. I made it less than 2 miles from the peak when I decided to make camp. I don’t know if I’m experiencing micronutrient deficiency of some kind (lacking vitamins) or am possibly just dehydrated? I felt very tired today.

The ascent of Mt Baden-Powell was pretty rough too. It was the day before Memorial day so there were tons of day hikers out with enviable looking light daypacks. At one point I checked my map and I was only 2 miles from the peak…and 2000′ vertical feet below it. For some context, climbing down the Grand Canyon (North Kaibab trail) is about 4000′ of elevation over approximately 7 miles. This is almost twice as steep. Fun! 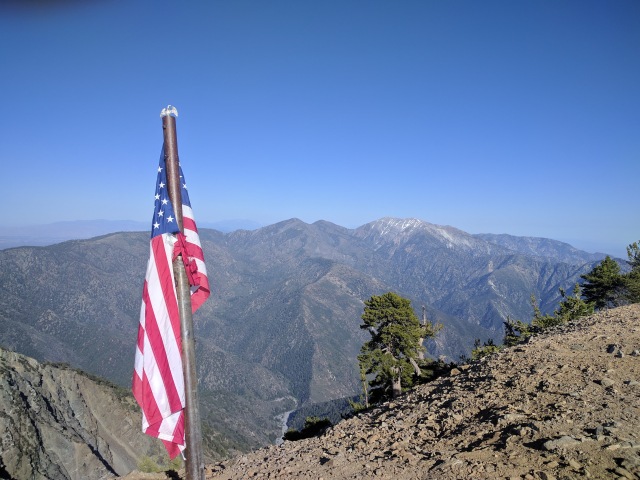 The view from Mt Baden-Powell. The peak stood at an elevation of 9,407′ and was named for the founder of the Scouts organization. There was a monument at the peak and a trail register that looked to have been signed by a lot of kids.

I expected to see GQ and Eeyore today since they spent the night in Wrightwood last night. But I was a little slow to get started this morning since I went into Wrightwood for breakfast. Maybe they’re ahead?

Today I took some more advice from the famed Billy Goat. As told to me by Legend, his advice is as follows:

Never pass up a picnic table because you don’t know when you’ll see another.

Never pass up a hot shower or meal because you don’t know when you’ll get your next one.

If someone offers to help you out on trail – food, money, whatever – always be gracious and accept some of it, even if you don’t necessarily need it.

(I think there was a fourth item, but I can’t remember it)

So I took the first adage to heart and spent the day hopping picnic table to picnic table. It was kind of excellent. I stopped at Little Jimmy Spring around noon and didn’t leave until around 3. There was a group of hikers chilling out there so I stayed to enjoy the shade and companionship. I met a Quebecois girl named Quoi who seemed thrilled to have someone to speak French with, and Neon came along to give her a third gear shakedown. She’d already dropped probably 10 lbs from her pack and figured she could stand to lost another 5.

A little further along, I came into a parking lot just as a trail angel was pulling in to make tacos! Her name was Brenna, and the tacos were delicious. 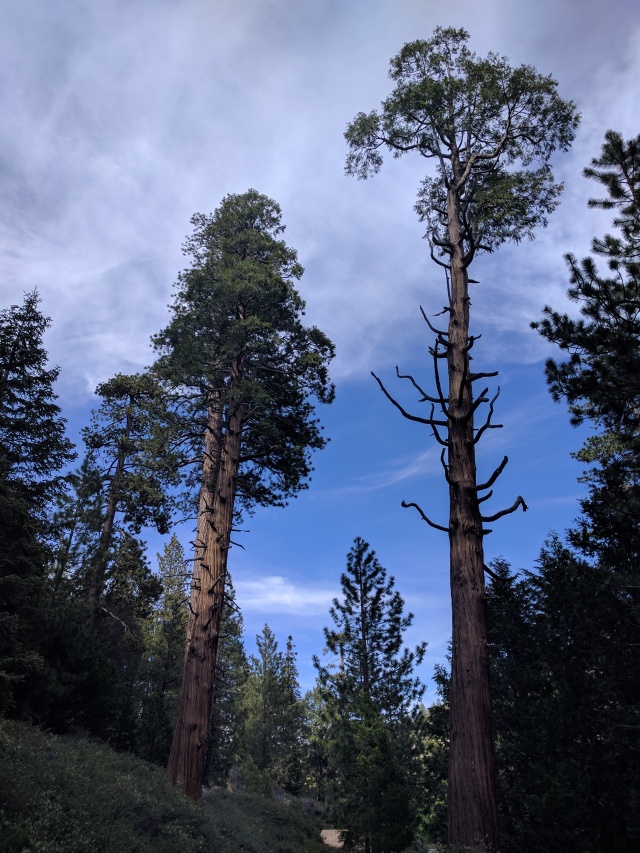 There were a lot of day hikers out that day (being memorial day), so it was a good day for trail magic. Some overnight hikers offered to take trash from us thruhikers, free food, and I got an easy hitch past a trail closure. Also, I camped with some other thruhikers, Neon and Darn Tootin’, and Neon was generous enough to share some joints. All around a solid day. 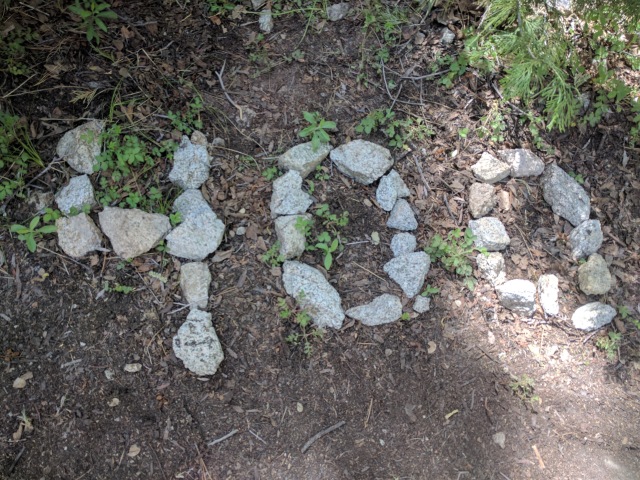 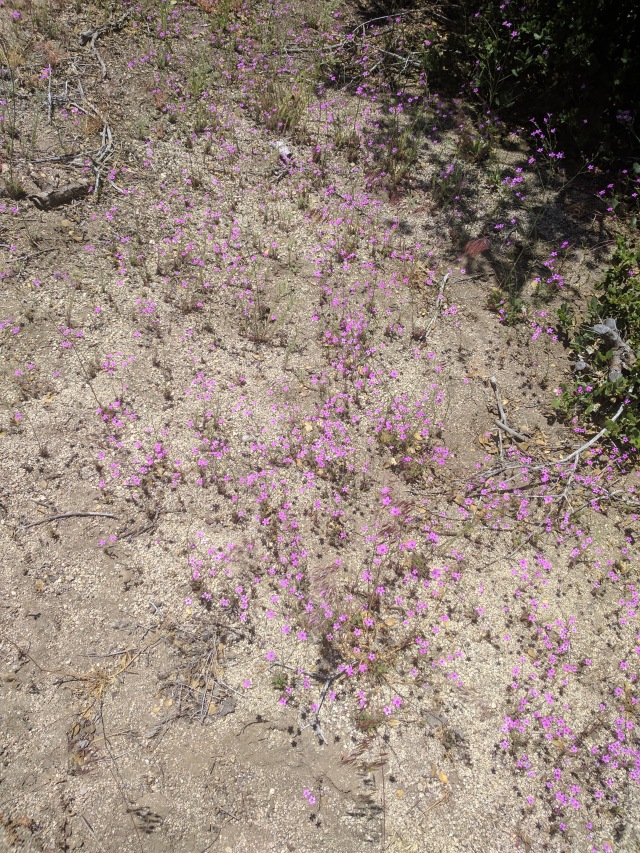 I was feeling pretty slow again today, so my trail family caught up with me at a water source around 4p.m.  Chris and Mette were feeling nearly ready to camp, GQ and Eeyore felt like they’d get in another couple miles. The speedy fellows took off (I waited for them to leave the water source before me rather than have them catch up an embarrassingly short time afterwards). I took off after them and stopped with Neon at the place Mette and Chris wanted to camp. They showed up a few minutes later and we all had some dinner and jammed to music. It was damn hot that day, but the sun was finally starting to set. I’d only hiked about 10, 11 miles that day, so I felt like I could knock off another 4 or 5 before bed. Neon told me we were doing 10.

But a mile or two down trail (Neon had already gone on ahead when I stopped to pee), I really started feeling like I could do some decent miles that night. So I changed into warmer clothes as the sun set, smoked my last joint, and pulled out my tiny bottle of bourbon. I plugged my headphones into my music – time for a party for one. After the sun had set, Neon saw my headlamp coming up behind him, so he waited for me, and we crushed 10 miles. I have never felt like I had such a good pace. We got to camp and were tucked into our sleeping bags by 10:30.

We’ve been gradually circling LA for a while now, so as we followed the crest of a hill, we could see the lights go on for miles. The photo didn’t turn out great, but the view was spectacular, and the stars were mirroring the city lights up above.

Neon decided to knock off a 30 mile day so I said farewell when he left camp early.

As I came down the hillside into a fire station for water, I saw a huge group of people coming up the trail. I thought it might be a school field trip, there was easily 40 people there. As I got closer, I realized that they were actually adults, and as I approached they were divvying out a gigantic sack of miniature cucumbers to their group. This is possibly the most random trail magic I have received, but those cucumbers were delicious. As I left the fire station half an hour later, I ran into another member of their group who tried to convince me to stay. They were making lunch for hikers! Unfortunately I had a lot of miles left to put in that day, but he pushed a bunch of food on me before I left and it was delicious. I got 4 different bun/biscuit things which had red bean paste in them and some questionable looking rice cake (which I didn’t end up eating).

I lazed around that afternoon, doing only a few miles at a time. It was disgustingly humid. Mette and Chris caught up with me again. They too had basked in the joy of Korean trail magic. I hiked about 5 miles with them, falling behind a little as we ascended a hill. It was still really humid, so I sat down to wait for the sun to set and I could pull out my excellent night hiking skills. I called my partner and talked to him for quite a while on the phone, but eventually I started to get cold. So I started hiking while talking to him, but the instant I stood up I knew that there was something off about my foot. As I summited this final hill of the day, I was struck with crippling arch pain. I’d meant to hike at least another 5 miles after where Mette and Chris were planning to camp, but when I hobbled in well after sunset, I knew I wasn’t going any further that day. I think the new insoles I’d bought at REI had too high of an arch for my feet. Luckily, I’ve beaten them into submission since then and haven’t had any more trouble.

The sunset as I crested the last hill was really lovely. The cascading hills going off into the distance each seemed shrouded in a slightly lighter shade of misty blue. It was beautiful. As per usual, the photos can do no justice to the views out here.

The next day was hot. Really hot. We made it to the KOA in Acton by about 2:30 in the afternoon and were feeling beat, but there was a pool, food and beer there. For a more detailed account of that day, check out my short piece called Grocery Shopping while Hungry.

We woke up even earlier to try and beat the heat. It was a good idea as this day ended up even hotter than the day before. Luckily, we had a pretty easy 13.9 miles into Hiker Heaven (an excellent hiker hostel in Agua Dulce, CA) where Eeyore and GQ were hanging out. 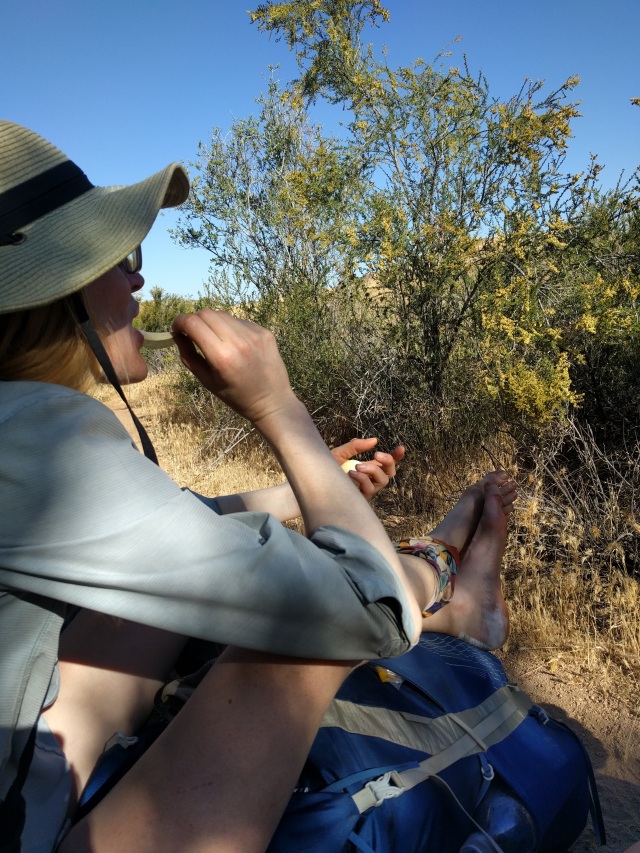 While taking a snack break

The geology was really cool on this hike as we passed through a floral canyon and ended up near Vasquez Rocks, a place where they filmed some of the original Star Trek!

Chris: Can we go explore down that canyon quickly?

Samwise (me): This is Team Lollygag, Chris. We can do whatever we want!

Despite our lollygagger proclivities, we made excellent time into Hiker Heaven. Nearos into town are awesome because we get in really hungry and hot, and I find I enjoy the amenities so much more. We went and had a big breakfast with so many drinks. Coffee. Tea latte. Juice. Fruit smoothies. Many mason jars worth of water.  Could you tell that the desert is really starting to heat up on us? GQ and Eeyore came and met us at the lunch place. It was so good to have the team reunited!

Made it to Hiker Heaven!

Hiker Heaven is great. Laundry, showers, haircuts, sewing machines, device charging, and a whole trailer for hikers to hang out in. We showered and got dressed up into the spare laundry clothes that they provide – clean cotton feels so good after weeks of dirty hiker clothes – and headed into town. Eeyore just sold his place in Denmark, and so he treated us all to dinner at a Mexican place in Agua Dulce.

This is everyone crammed into the back of the Hiker Heaven shuttle truck. Apparently they’ve fit up to 32 people into that vehicle before (or 21 with packs).

And then I had to say farewell (for now). I got a late ride into LAX and spent the night in the airport. I was looking forward to some time at home, seeing my boyfriend, family, and friends. Looking forward to some rest. Back to the trail in a week. Until then, have fun and make wise decisions.