A couple of years ago, my father recommended a book to me (I bet many of you have heard of it…). The conversation went something like this:

Dad: You should check out this book/movie Wild, I think you would like it. Do you want to borrow it?

Me: What’s it about?

Dad: This woman loses her mother and to deal with her demons, she ends up hiking the Pacific Crest trail.

Dad: It’s this hiking trail that goes all the way from the Mexican border to Canada through the western part of the States.

At which point, I was pretty much sold on the idea. 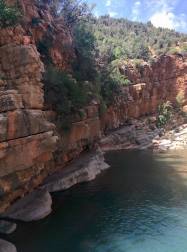 Is it cliche to say “because it’s there”? The truth is that the why is much harder to narrow down than the other questions – what, where, when. How is a question for another day (#gearpostiscoming). Beyond an impulse to do something of epic proportions, the PCT offers an ineffable draw to me. It offers me the chance to disconnect from the social media world, to spend some time away from the fluorescent lights of my cubicle. I want to see the world with my own eyes, and get the chance to clamber all the way to the top of a mountain before trudging back down the other side. And then repeat that ad nauseum for the entire summer!

The way that people talk about the PCT reminds me remarkably of one thing I’ve done before – tree planting. Lugging a heavy pack over rough terrain, days off in town, the nicknames, the pain, and the reward. And more than anything, it reminds me of the community. Those I’ve tree planted with were some of the coolest people I’ve ever met. The memories I have of that summer are bright and vivid, and I treasure them. People talk about the PCT in the same way.

It’s simple and complicated at the same time. So I’m planning to get out there and put one foot after another. And I expect I’ll find my meaning eventually.